We’re delighted to have been part of this historical journey.  Such an achievement by the whole team.

How did you spend Christmas Day? Tucking into turkey or slurping endless eggnogs? Well, spare a thought for these six rowers, who chose to spend their festive season on the icy-cold waters of the Drake Passage, rowing between Chile and Antarctica!

A team of rowers attempting to become the first to row the Drake Passage between Cape Horn at the tip of South America and the Antarctic peninsula have been successful. The six-man crew – comprising Fiann Paul (captain), Colin O’Brady (first mate), Cameron Bellamy, Andrew Towne, Jamie Douglas-Hamilton and John Petersen – rowed for 12 days 1 hour 45 minutes, making the first completely human-powered crossing of this treacherous stretch of water.

The row and its official time was confirmed by Guinness World Records’ ocean-rowing consultants, the Ocean Rowing Society, who also congratulated the event organiser and captain, Fiann Paul, on becoming the first person to complete Ocean Explorers Grand Slam (that is, the first person to row on five oceans). 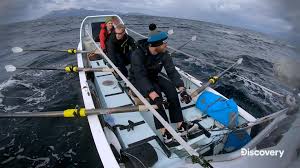 “The Impossible Row”, as the project is named, saw the team depart from Cape Horn in Chile on 13 December at 12:00 UTC (Coordinated Universal Time) and arrive at Primavera Base on San Martin Land on the Antarctic Peninsula at 13:45 UTC on Christmas Day.

This row represents one of the most significant human-powered adventures ever undertaken, and a number of records were established as a result of the row: